I ran out of time yesterday to post about my walk up Yacaaba Headland and how I only just avoided being in a storm that was moving in. So today (it’s actually the 27th July 2012 as I type away) I must get two days of posts done, even if I slip this one in back in time, so to speak (as you can with the post time when posting). 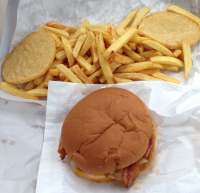 So I decided to do the Yacaaba Headland walk just before lunch and had lunch in the carpark, while reading the paper. Nothing too healthy – I tend to eat far too much junk when I’m on holidays. So it was a bacon & egg roll, as well as a couple of potato scallops and some chips (and coke of course) See Picture at Left. It was really brunch and I needed the energy boost to accomplish the walk. Sounds like a fair excuse anyhow. You do burn a bit bushwalking and climbing mountains.

So after lunch I set out on the walk. It was a beautiful day, spring like, which was quite strange given it was the middle of winter. It was really quite warm and a great day for a walk along the beach and for being in the great outdoors. The walk to the top of Yacaaba Headland from where I set off was a good 1km along the beach, then a further 1.5km from the beach to the top of the headland. So not a great distance really, though the same ground would have to be covered again on the return, so something like 5km all up. I had plenty of time to cover that distance and I knew that from having done this walk before. So of I went.

First up though was a picture of the scene before me as I got through the sand dunes and onto the beach.

ABOVE: The Beach and Yacaaba Headland in the Distance

There were very few people out and about, just a couple of people fishing along the beach and a few walkers as I approached Yacaaba. I could see what appeared like a storm brewing back towards the north and out west. Nothing to worry about at this stage though. Plenty of time. 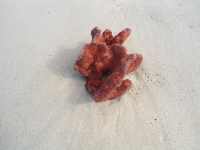 One of the things I noticed along the beach was the amount of debris from the sea. There was a fair bit of what I would call natural debris, such as timber, weed of various types, sponges (See Picture at Right), heaps of shell fragments and even a small fish. However, there was a bit of human debris (rubbish) also, which was a shame. Got me to thinking if anything from Japan would end up here in the long run – from the tsunami. Most of it is heading to the US and west coast of North America, but it wouldn’t be at all surprising if a bit made its way to the Australian east coast.

After a bit more than 1km I reached the headland and began my ascent up Yacaaba. The track to the the top of Yacaaba is easily followed and not too difficult in my opinion. There are some steeper sections and the track can be a bit rocky, loose and a bit unstable underfoot, but not too bad overall.

There aren’t a lot of wildflowers to see there at the moment, variety wise I mean. There are plenty of Wattles in flower of course and the usual Banksias, as well as one or two other flowering plant species to be seen. 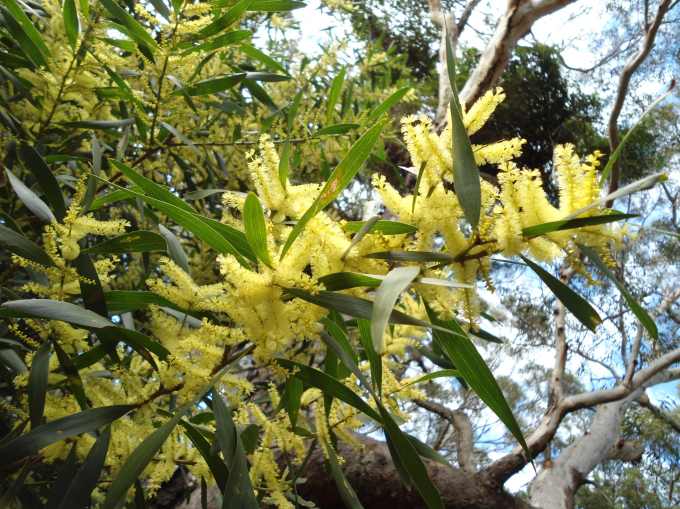 ABOVE: Wattle BELOW: More Wildflowers 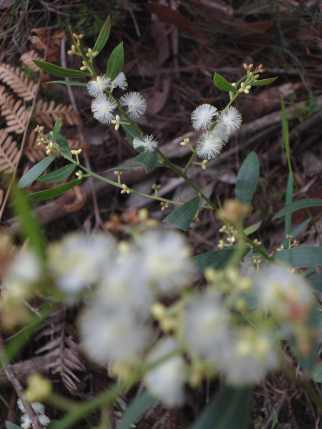 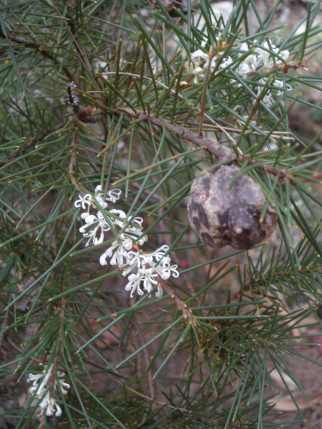 As you walk towards the top you begin to get some fantastic views over Port Stephens and in particular Hawks Nest, Tea Gardens and Winda Woppa. The further up you go the greater the views of course and as you near the top there are views up and down the Pacific Coast. It really is a great place on a clear day for fantastic coastal vistas.

ABOVE: View towards Tea Gardens BELOW: View over the Pacific Ocean

Having enjoyed the views for a while, I decided I had better start the trip back and try and beat the storm that was now rapidly heading my way. It was very dark out to the west and north, thunder could be heard rumbling along and flashes of lightning in the clearly heavy rain off in the distance. So down I went. The trip back down was fairly quick, having observed plenty on the way up and knowing the storm was rapidly approaching the descent was somewhat quicker than the ascent had been. No surprises there really.

ABOVE: The View up the Coast from the Bottom of Yacaaba – Shows the Approaching Storm.

The view up the coast (as seen in the above picture) was marked by the approaching storm, which became increasingly menacing as it adavanced and I got closer to the car. It doesn’t look too bad in the photo above, but as I neared the car It was fairly severe in its appearance and I just got into the car as the first drops of rain began to drop. It was pouring by the time I got back home (just 5 minutes or so away). Yet the storm was gone as fast as it hit.

This photo, taken quite some time ago, was taken near Orange. It’s just a house in the distance.

This photo was taken quite a few years ago at the entrance to Borenore Caves, near Orange, in the central west of New South Wales, Australia. I was able, with a friend, to follow the cave internally for some distance. We used torches and eventually made our way out through a side entrance. 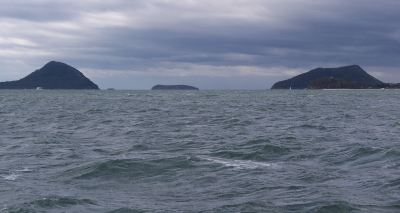 Firstly, I must apologise for not posting over the last few days. I have no excuse – except to say I forgot to do so. Oops!!! OK, so I have the apology out of the way – time to post a photo for today.

Today I went on a ferry trip from Tea Gardens to Nelson Bay, did a spot of shopping and then came back via the ferry. It was a bit choppy on the water today and we got tossed around a little. Wasn’t a bad trip and I picked up a few items that I had wanted to get for a while. The ferry cruise across the ‘port’ would have been a lot more pleasant if it wasn’t so windy and cold, but still a good trip.

The photo at right was taken from the ferry while in the middle of the crossing of Port Stephens towards Nelson Bay. The picture shows both Yaccaba and Tomaree, with Broughton Island in the distance.

My intention is to post either a photo, a video, a quote or a link per day.