WordPress is one of the best (the best in my opinion) blogging platforms there is. You can install WordPress on your own site or have a site that is hosted by WordPress itself. I have quite a number hosted at WordPress and cannot praise the platform enough – I love it.

WordPress has a whole section of their site dedicated to lessons about blogging: 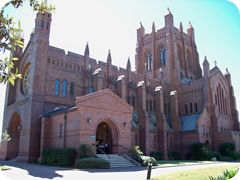 Being a Protestant and a Particular Baptist, I don’t go much for the building as far as it being essential for worship. Don’t get me wrong, having a dedicated building to meet in is very helpful and useful, but if you are to have a building it needs to lend itself for the purpose, being completely functional as such and efficient in terms of the funding for it (it is far more profitable to use what money you have in carrying out the mission, than building a facade of religion).

Having said all that, the building in this picture is certainly an impressive one. It is a grand old building (as far as ‘old’ goes in relatively young Australia), rich in history, as it contains many historical items of interest.

The building pictured is that of the Newcastle Cathedral (Church of England). As grand as it looks, it is hardly the bastion of Evangelical Protestantism that one would have hoped for. Any true semblance of Evangelical Christianity that it may have borne witness to has long gone from its walls.

My intention is to post either a photo, a video, a quote or a link per day.